Ann Curran is author of the book of poems, Me First (Lummox Press, 2013) and the chapbook Placement Test. She is former long-time editor of Carnegie Mellon Magazine and staff writer for the Pittsburgh Catholic and the Pittsburgh Post-Gazette. She holds degrees from Duquesne University. She taught at Duquesne and the Community College of Allegheny County. Her poetry has appeared in Rosebud Magazine, U.S. 1 Worksheets, The Main Street Rag, Off the Coast, Blueline, Third Wednesday, Notre Dame Magazine, Ireland of the Welcomes, Commonweal Magazine and others, as well as the anthologies: Along These Rivers: Poetry and Photography from Pittsburgh, Motif 2 Come What May and Motif 3 All the Livelong Day, Thatchwork, and Surrounded: Living With Islands.

Joseph Karasek performed as an actor and violinist with The Theater Within, an improvisational theater group in New York City. A former violist with the National Orchestral Association, he created school orchestras on the elementary and secondary levels, and taught music composition and music theory at Long Island University. Living in Pittsburgh, PA since 1991, he has taught philosophy at the Academy for Lifelong Learning at Carnegie Mellon University. He also led a study group on James Joyce's Ulysses there. His poetry has been published in Only the Sea Keeps: Poetry of the Tsunami (Bayeux Arts), and Blue Arc West: An Anthology of California Poets (Tebot Bach), and Signatures (Osher, Carnegie Mellon). His two books of poetry, Beyond Waking and Love and the Ten Thousand Things, were published by Tebot Bach in 2009.

Christine Doreian Michaels came from England in 1971 and is a retired psychologist living in Regent Square. She was an invited reader at the James Wright Poetry Festival, and is published in the Pittsburgh Post-Gazette, The Exchange, Taproots, Songs For The Living, Signatures 2001, 2003, 2006, and the international anthologies, No Choice But To Trust and Only the Sea Keeps: Poetry of the Tsunami. She won first poetry prize in The Labyrinth Society's annual contest 2007 and has a poem in Along These Rivers, an anthology celebrating Pittsburgh's 250th anniversary.

Randy Minnich is a retired chemist, now focusing on writing, environmental issues, t’ai chi, and grandchildren. A member of the Squirrel Hill Poetry Workshop and Pittsburgh Poetry Society, he has published two books, Wildness in a Small Place and Pavlov’s Cats. His work has also appeared in Main Street Rag, Pearl, Pudding, Snowy Egret, Blueline, and other publications.


Randy Minnich - Click to Play (Right-Click to Download)
Pam O'Brien began writing poetry at Allegheny College. Her career has included grant writing, community organization, public relations and advertising, and teaching Spanish. She currently holds a lectureship in the English Department of the University of Pittsburgh where she serves as the Associate Director of Public and Professional Writing. She was a 2012 finalist for the Chancellor's Distinguished Teaching Award and recipient of teaching excellence awards from the College of General Studies in 2008 and 2011. She has published three chapbooks, Kaleidoscopes, Paper Dancing and Acceptable Losses. Her full-length poetry book, The Answer to Each is the Same, was published in 2012.

Joanne Samraney, author of the poetry chapbook, Grounded Angels, which won the 2001 Acorn-Rukeyser Award and co-author of Breaking Bread with the Boscos, a collection of family memoirs and recipes has poems in many literary magazines and journals such as Main Street Rag, Verve, Voices in Italian Americana, Loyalhanna Review and most recently in Hudson View, Earth Daughters and Steam Ticket. Her poems have also appears in both Along These Rivers and the Sandburg-Livesay Anthologies. Her latest chapbook, Remaking Driftwood was published by Finishing Line Press (2010).

Shirley Stevens is a member of the Pittsburgh Poetry Society and the Squirrel Hill Poetry, and St. David’s workshops. She serves as a mentor for the Writing Academy and a poetry workshop leader for Passavant Retirement Village and The First Word. Her poems most recently appeared in The Potter’s Wheel, Honing the Poem, and A Time of Singing, as well as Poet Lore, Along These Rivers, Fission of Form, The CommonWealth: Pennsylvania Poets on Pennsylvania Subjects, The Pittsburgh Post-Gazette, and Squirrel Hill Magazine. She is the author of Pronouncing What We Want to Keep.
Shirley Stevens - Click to Play (Right-Click to Download)

Mac users who lack a 2-button mouse may press Control-Click on the appropriate links to enable downloads.
Posted by Hemingway's Poetry Series at 8:01 AM No comments:

(Yeah, this was Monday night, not Tuesday night. The Pittsburgh Penguins hockey team scheduled an important playoff game on Tuesday without consulting us so our venue was likely to be overrun with boisterous fans. Discretion . . . etc.)

Roberta Hatcher’s poetry has appeared in The Comstock Review, Main Street Rag, St. Petersburg Review, Storm Cellar, Rune, Pittsburgh’s City Paper, and the Post-Gazette, among others. She has been a finalist for the Patricia Dobler Award, was runner-up for the Arkadii Dragomoshchenko Prize for Innovative Use of Language in Poetry, and her poem French Lesson #3 was nominated for Best American Poets 2014. She holds a Ph.D. in French from the University of Wisconsin-Madison and currently tutors candidates for citizenship at the Greater Pittsburgh Literacy Council. Her chapbook French Lessons (Finishing Line Press) was published in 2016.

Joe Kaldon lives in Aliquippa, Pennsylvania and is the author of Rust Belt. He works as a product manager for a steel company and is a graduate of Penn State. He enjoys writing, ranging from letters-to-the-editor to essays to poetry, and this web site www.joekaldon.com is his latest effort. His poetry has appeared in Taproot Literary Review, The Pittsburgh Post-Gazette and The Brentwood Anthology edited by Judith Robinson and Michael Wurster.

Joe Kaldon - Click to Play (Right-Click to Download)
Don Krieger is a biomedical researcher living in Pittsburgh, PA. His poetry has appeared online at TuckMagazine.com and in print in Hanging Loose (1972), Neurology (Fall, 2017), Poetica (Fall, 2017),  and The Taj Mahal Review (December, 2016).

Kathy McGregor grew up among coal patch towns and farms in Western Pennsylvania. She’s been an English teacher, union organizer, non-profit director, headed a consulting business and currently owns/operates a specialty native plant nursery. She lives in Greenfield with her partner, Bob, is the mother of a police detective and grandma of twins. Her poems have appeared in the Brentwood Anthology, Signatures and the Mill Hunk Herald. She is a member of the Pittsburgh Poetry Exchange.


Aaron Novick's poetry has appeared or is forthcoming in New Orleans Review, Third Wednesday, and Notre Dame Review. He is a graduate student in the History and Philosophy of Science department at the University of Pittsburgh, studying the relationship between contemporary developmental genetics and evolutionary theory.


Squirrel Hill native Stuart Sheppard graduated from Kenyon College, and has worked on Wall Street, Madison Avenue, and as a management consultant.  In 2003 he published a well-reviewed novel, Spindrift.  Stuart writes theatre, art, and book reviews for the Pittsburgh City Paper, and serves on the board of the Animal Care and Assistance Fund.  His most recent work can be seen in U.S. 1 Worksheets, the Pittsburgh Poetry Review, and other publications.

Alyssa Sineni is a writer and metalsmith. She is a member of the Pittsburgh Poetry Exchange, The Craftsmen’s Guild of Pittsburgh, and works as the Programming Director for a local non-profit, which features artists and writers. She also writes for two blogs and co-hosts a podcast that highlights the arts.

Jimmy Cvetic Reads Have I Sinned

Mac users who lack a 2-button mouse may press Control-Click on the appropriate links to enable downloads.

Posted by Hemingway's Poetry Series at 6:44 PM No comments: 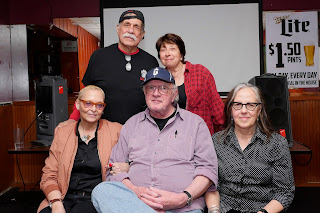 Jan Beatty's fifth full-length book, Jackknife: New and Collected Poems, was published in January, 2017 by the University of Pittsburgh Press. Her last book, The Switching/Yard, was named one of ...30 New Books That Will Help You Rediscover Poetry by Library Journal. The Huffington Post named her as one of ten women writers for "required reading." Other books include Red Sugar, Boneshaker, and Mad River, winner of the Agnes Lynch Starrett Prize, all published by the University of Pittsburgh Press. Beatty is host and producer of Prosody, a public radio show on NPR affiliate WESA-FM featuring the work of national writers. Beatty worked as a waitress for fifteen years, and as a welfare caseworker, an abortion counselor, social worker and teacher in maximum-security prisons. She directs the creative writing program at Carlow University, where she runs the Madwomen in the Attic writing workshops and teaches in the MFA program.

Judith Vollmer's fifth full-length collection, The Apollonia Poems, the 2016 Four Lakes Prize of the University of Wisconsin Press was released in March 2017. A  recent volume, The Water Books, was published in 2012 by Autumn House Press, and previous collections have received the Brittingham, the Center for Book Arts, and the Cleveland State publication prizes. She is the recipient of fellowships from the National Endowment for the Arts and the Pennsylvania Council on the Arts. Her essays and reviews are included in The Cambridge Companion to Baudelaire and elsewhere. She was a founding editor of the literary journal 5 AM.  Vollmer teaches in the low-residency MFA Program in Poetry & Poetry in Translation at Drew University.
Judith Vollmer - Click to Play (Right-Click to Download)

Through his writing, editing and teaching, Ed Ochester has been a major force on contemporary letters for more than three decades. He edits the Pitt Poetry Series and is general editor of the Drue Heinz Literature Prize for short fiction, both published by the University of Pittsburgh Press. From 1978 to 1998 he was director of the Writing Program at the University of Pittsburgh, and was twice elected president of the Associated Writing Programs. He co-edited the poetry magazine 5AM, and lives in a rural county northeast of Pittsburgh. His recent books include Snow White Horses: Selected Poems 1973-1988 (Autumn House Press, 2001), American Poetry Now: Pitt Poetry Series Anthology (University of Pittsburgh Press, 2007),Unreconstructed: Poems Selected and New (Autumn House Press, 2007) and Sugar Run Road (Autumn House Press, 2015). Poems just published or forthcoming in: American Poetry Review, Agni, Chiron Review, Great River Review and Nerve Cowboy.
Ed Ochester - Click to Play (Right-Click to Download)

Jimmy Cvetic Reads Identity Theft and the Vanity of Your Worth

Mac users who lack a 2-button mouse may press Control-Click on the appropriate links to enable downloads.
Posted by Hemingway's Poetry Series at 2:49 PM No comments: